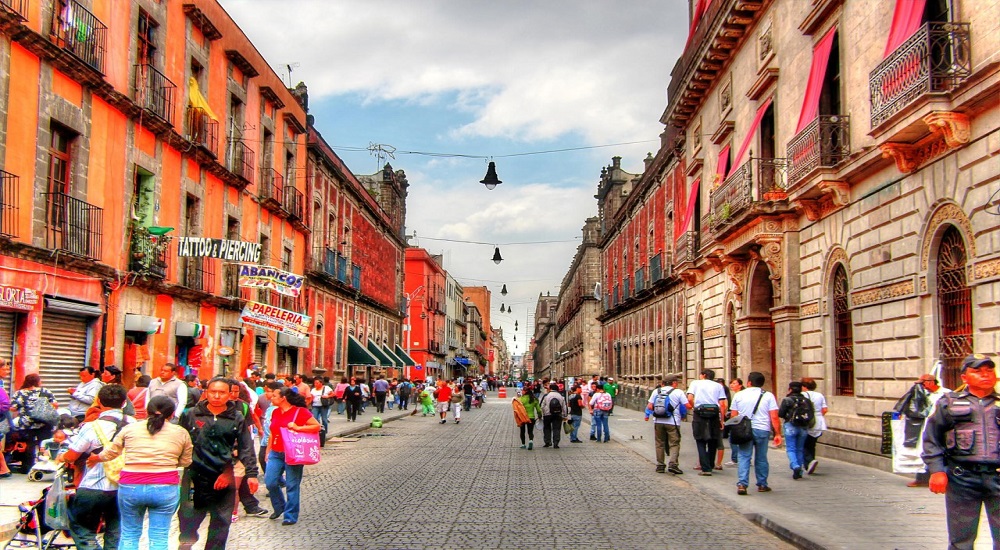 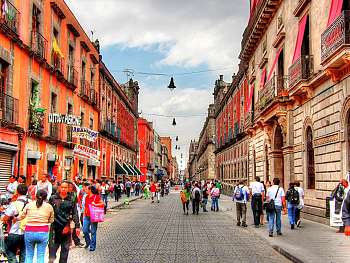 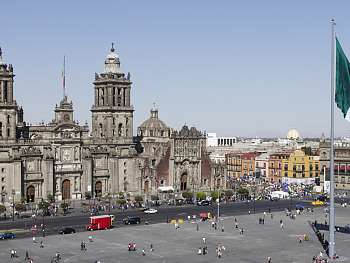 American breakfast in hotel and City Tour that includes: Plaza de la Constitución (The Constitution Plaza) known as Zócalo, surrounded by beautiful Baroque buildings, among which is the Cathedral (the country’s largest religious monument built over the great Aztec temple). The Palacio Nacional (National Palace) is the headquarter of the Presidency of Mexico, where visitors can admire murals painted by Diego Rivera. One of the main and most recently discovered attractions is the Templo Mayor, the great temple of the Aztec capital. Brief stop at the Guadalupe Shrine.
The tour continues to Teotihuacán, named by the Aztecs as “the place where the Gods are born”. This location has three great constructions: The Pyramid of the Sun, Pyramid of the Moon and the Citadel; all of them were built over the so called “Calzada de los Muertos” (Road of the Dead). Lunch in restaurant .Return to Mexico City and accommodation. (Breakfast, Lunch).

Transfer to the airport and flight to Tuxtla Gutiérrez, capital of the State of Chiapas. According to the flight schedule, visitors will be transferred to the Cahuaré wharf to enjoy a launch boat trip through the Cañón del Sumidero (Sumidero Canyon) ; the altitude and the beauty of the place will make the experience incredible. After that the tour continues to San Cristóbal de las Casas. Lunch in restaurant. Arrival and accommodation at the hotel Villa Mercedes San Cristobal or similar. (Breakfast, Lunch).

In the morning visit one of the most typical local markets where hundreds of Indigenous people sell their hand-made products every day; the tour continues to the Baroque Santo Domingo Church founded in 1547. Then visitors will meet the Indigenous communities of San Juan Chamula and Zinacantán; the San Juan Chamula community is particularly linked to this church where ceremonies were celebrated that  had a great influence of paganism. The Indigenous population of Zinacantan, on the other hand is very loyal to the Catholic faith. Also you can taste a delicious “Tortilla” made by yourself and enjoy a shot of “Pox”, an ancient Mayan elixir! Return to San Cristóbal and accommodation. (Breakfast)

Departure to Palenque with a stop at the Agua Azul (Blue Water) waterfalls; the trip will lasts approximately 5 hours on a mountain road and on the road the visitors can enjoy the abundant vegetation of this Chiapanecan (from the State of Chiapas) zone. Arrival at Palenque and check-in at the hotel Villa Mercedes Palenque or similar. (Breakfast).

Visit of the Palenque archaeological site. The area displays beautiful Mayan work made in stone and stucco; this area is frequently recognized as one of Mexico’s most beautiful places due to its ruins enclosed in the Chiapanecan jungle. Its most important temple is called Templo de las Inscripciones (Temple of the Inscriptions), and it is here that explorers discovered Pakal’s tomb, with his famous jade green mask. Then the tour will go to Campeche, which is the capital of the Campeche State. Lunch in restaurant on route. Upon arrival to Campeche, short visit to the ancient town, surrounded by fort walls and towers built to protect this city from the pirates. Campeche has a Colonial mood thanks to its gorgeous houses and austere churches. After visiting the city, check-in at the hotel Plaza Campeche or similar. Accommodation. (Breakfast, Lunch). 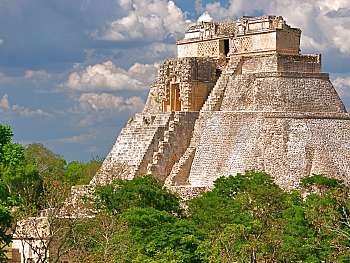 Departure to Mérida with visit of the Uxmal archaeological site on route. Uxmal means “built in three stages” and it is a typical example of the classic and post-classic Mayan period; its main constructions are: Pirámide del Adivino (The Fortuneteller’s Pyramid), Palacio de los Gobernadores (Governor’s Palace) and the Cuadrángulo de las Monjas (Quadrangle of the Nuns). Lunch at restaurant. The tour continues to Mérida, also known as the “White City”, which has Colonial houses as well as houses that date back to the beginning of the century in Arabic, French and Italian styles. Those houses have witnessed all the old wealth that was generated thanks to the sisal culture. Stop at Mérida’s Zócalo, where visitors can admire the city’s main monuments: the Cathedral, the Government’s Palace, the Municipal Palace and the Francisco Montejo’s House. Check-in at the hotel Presidente Intercontinental Villa Mercedes or similar and accommodation. (Breakfast, Lunch).

Departure to visit Chichén Itzá archaeological site. Chichén Itzá was the Mayan capital of Yucatán and flourished between the 5th and 10th centuries AD. Visitors can admire the impressive buildings of the northern and central archaeological sites, such as: the Kukulcán Temple, the Ball Game, the Observatory, the Warrior’s Temple, the Convent of the Nuns and the Sacred Cenote. Lunch at Chichén Itzá in restaurant. In the afternoon, continue to Riviera Maya, visiting Cenote Saamal on route, with some time for a refreshing swim. Arrival and accommodation in the hotel Barcelo Maya Beach in all inclusive treatment. (Breakfast, Lunch).

The departure is guaranteed with a minimum of 02 passengers and 30 days prior.
Passengers on this tour may be integrated with passengers from other tours at their arrival to San Cristobal de las Casas to optimize the occupation of transportation and tour guides.