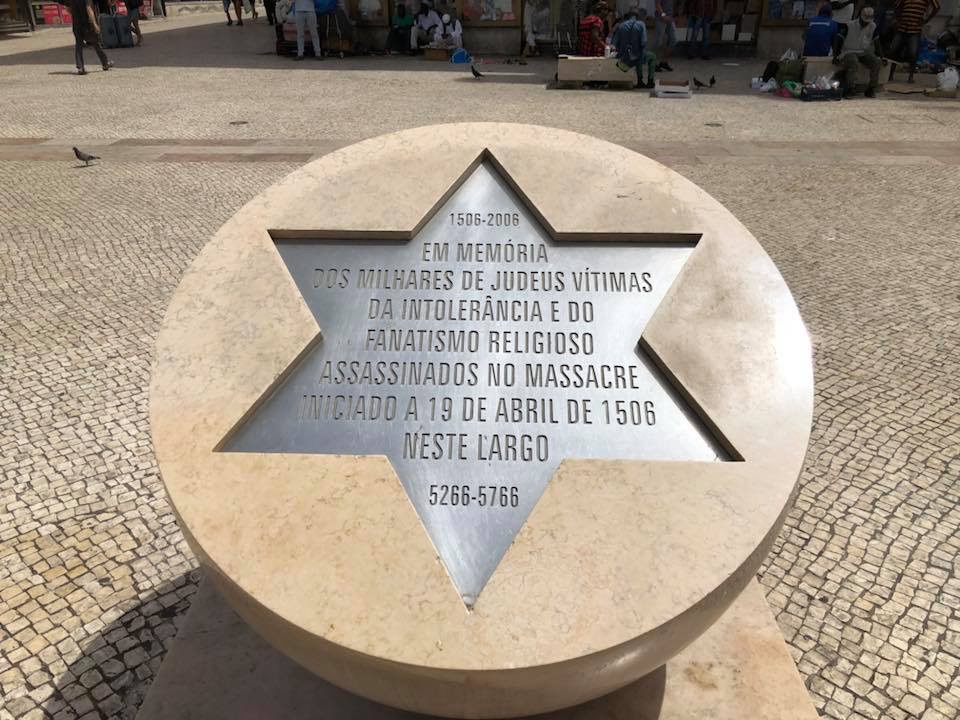 Space on the tour is limited. Please reserve your space now!

Overnight flight to Lisbon. Get ready for an amazing tour.
(Flight is not included)

Arrival early morning in Lisbon. A warm welcome by IBMT Tours at the airport and transfer to your hotel. Afternoon visit of the Calouste Gulbenkian Museum, housing one of the World´s largest private art collections. In the evening, welcome dinner for guests. Overnight in Lisbon.Welcome Dinner

Breakfast at the hotel. Departure for a full day tour of Lisbon with your local guide, finding all about the Jewish legacy in the Portuguese capital. It is known that until 1496 there were three Jewish Quarters in Lisbon. Besides strolling through the Alfama, we will visit the Shaarey Tikva Synagogue in Lisbon. In the afternoon, we leave towards the district of Belém, where we find the monuments alluding to the time of the Maritime Discoveries in the 15th and 16th centuries. Free time to lunch. We will stop at the Belém Tower (classified as a World Heritage Site by UNESCO), the 15th century fortress and departure point of caravels, and at the Discoveries Monument to mark the 500th anniversary of the death of Henry the Navigator. We will visit the Museum Calouste Gulbenkian. Return to the hotel. Overnight in Lisbon.

Breakfast at the hotel and check-out. We set off for Tomar where your local guide will show you the Synagogue and Luso-Hebrew Museum of Abraham Zacuto. A very rare example of a medieval Jewish temple and of pre-Renaissance Portuguese art, the Tomar Synagogue is the only one of its kind from this period to have been fully preserved in Portugal. Before leaving, it is mandatory to visit the Templar Castle and the Convent of Christ in Tomar, a unique monument in the history of the western world, awarded the classification of World Heritage Site by UNESCO. Built on a site that was originally used for Roman worship, this vast monumental complex illustrates seven centuries of Portugal's history and contains several important mementoes of decisive moments in the history of the western world. Overnight in Porto.

Breakfast at the hotel. Discover Jewish Porto and walk along the streets where a community was born and developed, a community that is supposed to have appeared just before the foundation of Portugal. The Jewish quarter of the city was situated deep in the heart of the village which in the 12th century was located near the Cathedral, in the area that is today defined by the ruins of the Convent of Monchique by the Torre dos Clérigos, Sé, Alfândega do Porto and the square and tunnel of Ribeira – and where some Jewish altars still survive in private estates. Walk towards the area of the old Mercado Ferreira Borges and visit the Palácio da Bolsa. This is where another Jewish quarter once stood, with a synagogue in its center, in what is today known as Rua do Comercio do Porto. In the Boavista area, the hub of Jewish life in the 17th and 18th centuries, visitors can see the Kadoorie synagogue, the largest synagogue in the Iberian Peninsula Jewish temple built between 1929 and 1937. In the afternoon, you take a 50-minutes cruise through the Douro before heading back to the hotel. Overnight in Porto.

Breakfast at the hotel. We set off to Castelo de Vide located at the bottom of a double hill crowned by a Medieval castle and the São Roque Fortress. Also, there’s a small “Judiaria” and a Synagogue, nowadays a museum that you will visit. The synagogue was transformed into a small museum that tells about customs, persecutions and the expulsion of Jews in the Iberian Peninsula between the 15th and 16th centuries. A jewel of a synagogue preserved over the centuries, located in a Jewish quarter with a lot of charm.

After lunch, a short drive will take you to Mãrvao, this pleasant and peaceful town that offers exceptional panoramic views of the plain and the Sierra de São Mamede. Its streets are narrow, and the houses have picturesque roofs. The town is full of colorful flowers where you will enjoy breathtaking views over the mountains and Spanish frontiers. Overnight in Caceres.

Breakfast at the hotel. Cáceres declared a World Heritage site by the UNESCO (1986) is a fascinating historic stone walled old town, where an important Jewish community thrived. We will visit the well-preserved Jewish quarter known today as the “Barrio de Sant Antonio”, the “Hermita de San Antonio” where the ancient synagogue was located as well as the “Nueva Juderia” (New Jewry) among others. Transfer to Seville, the colorful capital of Andalucia.Overnight in Seville.

Breakfast at the hotel. Discover the vibrant and modern city of Seville on a panoramic and walking tour who will include the grand Plaza de España, site of the pavilion of the great 1992 exhibition. Next visit the Barrio de Santa Cruz – the former Jewish Quarter with tiny cobblestone streets and magnificent indoor gardens hidden behind some sumptuous house’s façades. Continue towards the Alcazar Palace, still used as a residence for the Spanish Royal Family and the Cathedral said to be one of the largest in the world, that you visit. Here, you can find the resting place of Spanish Kings and Queens as well as the impressive sepulcher of Christopher Columbus – but are his remains there? Overnight in Seville.

Breakfast at the hotel. This morning check-out from the hotel and transfer to Cordoba, the former home of many Jewish scholars and poets. Once the biggest city in all of Europe, Cordova thrived and expanded with its unique blend of cultures. These are beautifully expressed with a visit to the Mosque-Cathedral, the most significant Muslim architectural achievement in the Western world. Walk through the streets leading up to the Jewish quarter that have been preserved with whitewashed houses and colorful courtyards and shops. Transfer to Granada.
Check-in at your hotel and evening at your own pace.Overnight in Granada.

After breakfast at the hotel, the local guide of the Alhambra will show you one of the Wonders of the World, the Moorish Palace of Alhambra and the Generalife. Located on a hilltop with the Sierra Nevada as background, Alhambra’s exquisite design and layout have few rivals. Be filled with a sense of mystique as you are guided past graceful courtyards, splashing fountains and lavish rooms. After lunch transfer to Toledo, the Jewel of the three cultures. 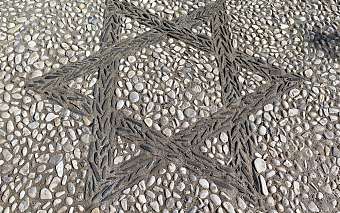 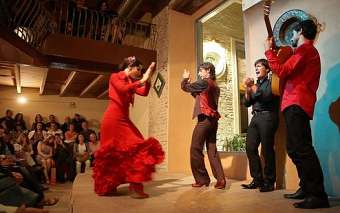 After breakfast, The day is devoted to Toledo, perched high on a hill by the Tagus River. With its naturally fortified location, Toledo was once the center for Jewish Spain with a rich, creative heritage. You will feel this atmosphere as you stroll the narrow alleys in its historic section, the true center of Spain widely considered a “pearl” in terms of its subtle beauty. You will visit El Greco’s house, formerly the palace of the prominent Samuel Halevy

Treasurer of King Pedro I and architect of the El Transito Synagogue. Continue to Synagogue de Santa Maria La Blanca, later converted to a church, and to the Synagogue del Transito which today houses the Sephardic Museum, both remarkable heritage of the Jewish culture. Continue to Madrid in the afternoon and enjoy time at leisure. Check-in at the hotel.Overnight in Madrid.

Breakfast at the hotel. Take a sightseening tour of Madrid including the Salamanca district and the Bull Ring Arena, the second largest in the world. Then you will stop at the Torre Picasso and the soccer stadium Bernabeu.
Continue on a walking tour towards the Royal Palace, a monumental construction of the seventeenth century, a mixture of Baroque and classicism. See also the Plaza de Oriente, the Opera House and the modern Almudena Cathedral. After that, walk through the “Madrid de los Austrias” and the impressive Plaza Mayor, one of the most popular and typical corners in Spain, where you will have free time for lunch. Enjoy the evening at your own. The bus will transfer you during the afternoon back to the hotel.Overnight in Madrid.

After breakfast leave to Segovia, located in Castilla- León, one the 17 Provinces in Spain. Though only few traces tell the story of a glorious past, Segovia stills stands as a remarkable monument to its past. On your walking tour discover the historic legacy of the Jews. Witness the imposing Roman Aqueduct and enter in heart of the ancient Jewish Quarter. Visit the Alcazar of Segovia, one of the most famous fortresses in Spain. Return to Madrid in the afternoon and enjoy a farewell dinner. Overnight in Madrid.

Breakfast at the hotel and check-out.Transfer to Madrid airport.

END OF OUR SERVICE.

Tour operates with a minimum of 10 people travelling

THE PROPOSAL DOES NOT INCLUDE

A National Tour Guide will accompany the tour through out.

Hotel Accommodation
We are presently holding the following hotels (or similar):